Period Technological Revolutions you can find in your Home

I just wanted to say that I really can’t take credit for a lot of the ideas in this Blog. They are the result of conversations and experiences I have had with customers during periods of time where we are trying to resolve design problems together. For example the first time I heard the description of Hybrid Architectural styles as “Cross Pollination” was from Frank Shirley at Frank Shirley Architects in Central Square Cambridge. I thought it was an apt description of Early 20th Century building activity in this area.

The Late Nineteenth Century development of Photography as a viable medium to be used by professionals every day is regarded as one of the stimulants for the Impressionist Painting Movement in France at this time. It is said that a lot of the French impressionists experimented with Photography. I was recently in the Back Bay, Boston at a customers home and noticed some tiles around the interior of the period Fireplace that were of Landscapes like Monets’ Impressionist style. I really only thought that this idea of commercializing an artists work to be represented in Interior design was a 20th Century phenomenon. For example a lot of Formica Floor Designs remind me of Jackson Pollock’s spattering in the 1950’s. But here was something I am sure of a Product Line like Grueby Faiance Pottery’s lines where Impressionism was being depicted in a Landscape.

Actually, it is well documented that there was a strong Boston-France connection at this time. A lot of the prominent artists in the Boston area spent a lot of time in France to study painting. I was wondering if Photography was used in some way to transfer the likeness of the Landscape to the tile.

I know the etched glass that was created by masking the effect of hydrofluoric acid through the use of a wax stencil was a very common manufacturing process. I was wondering if Photography had some part in the process of creating the different scenes.

It is now suspected the Dutch Master Johannes Vermeer used a  “Camera Obscura” to aid him in gaining the wonderful perspective and incredible detail in his paintings way back in the 17th Century.

These kind of  “Revolutions” happened very frequently and can be viewed in the simple items in your house. Gutta-percha was synthesized in a process similar to Rubber manufacturing. When I think of Rubber I think of strength and durability. But I just saw Gutta-percha wall designs that are incredibly well preserved in a Back Bay home from 1890. Gutta-percha was an early synthetic that was used in many decorative and functional forms like plastic is used today.

Many Antique Lighting Fixtures were made of Bronze castings because the alloy really lent itself to forming beautiful figures and such and were more easily to finish than brass. In the 1880’s, the use of Rose Brass Sheet allowed very decorative stampings to be created and constituted a Revolution during a 20 year period. Here is where Rose Brass Aesthetic Light Chandeliers were manufactured by companies like Thackera and Bradley and Hubbard that are considered very important American Lighting fixtures to collect. Examples of Bradley and Hubbard Aesthetic Light fixtures with intricate metal stampings made from Rose Brass Sheet are below : 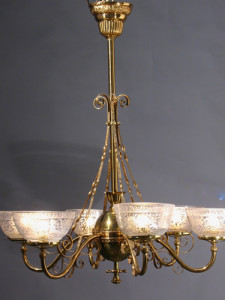 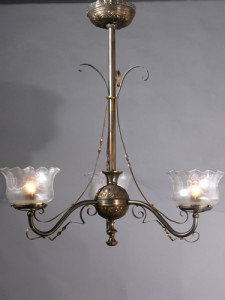