The Expression “Art for Arts Sake” is basically the sentiment that art in its many forms should be separated from moral or didactic intention but should be able to stand alone in and of itself. This idea created quite a discussion in the 19th Century and was associated with names like William Morris and John Ruskin as they were associated with the Aesthetic Movement.

I bring this notion up not to create a history lesson but to talk about how this idea filtered down into the collected elements that the creators of the Architecture and Interiors helped to surround themselves with.

In Antique lighting fixtures these ideas were reflected in the products of Thackera and Co. who created some of the most lovely antique chandeliers of this era and have earned the tag Aesthetic because of their uniqueness of design: 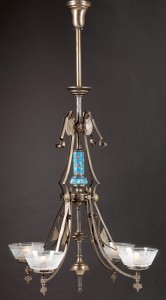 You can see the generational evolution of these ideas with a company called Cornelius and Baker that manufactured the first distinctly American Gas Chandeliers around 1850 in the US. Even though they had a distinctly American flavor the were still of the Revival Period reflecting European ideas of design: 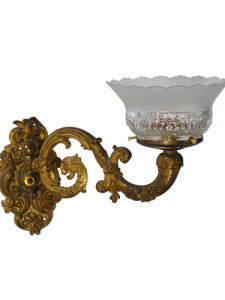 Circa 1850, Cornelius Gas Swing Sconces with Cougar Head and Eagles

In the 1870s and 1880s the evolution of the company changed to Cornelius Brothers who’s designs look nothing like the European inspired fixtures: 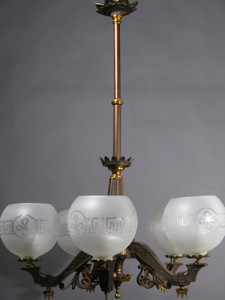 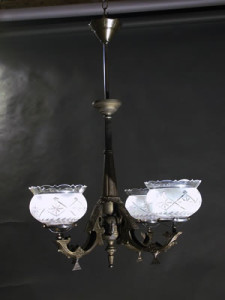 The manufacturers were interpreting the needs of the Landed Gentry of the time and creating products that expressed an identity that wanted to be separate from what had come before.

It is interesting for us more than too years later because we are more appreciators of the unique beauty that came out of this “discussion”. Perhaps we feel the responsibility of being Stewards of the Architecture and pay homage by being true to their intention in the restoration of the buildings.