During the late 1800s, European-trained architects designed high style period houses for the wealthy. Antique lighting of this period had wrought iron, stylized leaves and berries.

To see samples click one of these Antique Lighting products:

At the Turn of the Century , 1890 – 1900 , all Antique lighting styles were incorporated. Every conceivable style was used. Combination gas ...read more

In the Aesthetic movement, 1875 – 1885 , examples from Greek, Japanese, Persian, Moorish, Egyptian and other exotic styles were used in the Antique lights and sconces ...read more

In the Second Empire Period , 1860 – 1880, Italianate forms were used. This Style was named for the reign of Napoleon III (1852-1870), who undertook a major building campaign to transform ...read more

The Gothic Revival Period, 1840 – 1860, is antique gas lighting and sconces that is marked by the use of trefoils, quatrefoils, crockets and pinnacles, cluster columns, and pointed arches on the ...read more

The Rococo Revival Period , 1840 – 1860, was also known as “French Antique”. This period was influenced by the revival of the rococo style by the French. Antique gas lighting ...read more

The Victorian Age, 1840 – 1900, was when Victoria became queen of England in 1837 and reigned until her death in 1901. The age named after her was a period when England was at the height of power and prestige. In lighting , the Victorian Age included a variety of revival styles and sub styles that typified most nineteenth century lighting. There is no one Victorian style, and despite being

Not your ordinary Antique & Vintage Lighting.
Get the inside scoop of Updates & Special Offers
before anyone else. 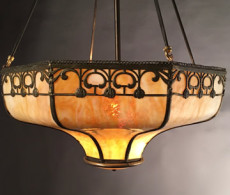